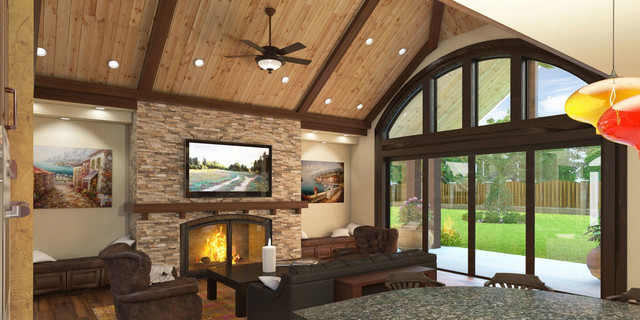 Minimalist ceiling made of wood

If you are bored with conventional gypsum or plain plywood ceilings, you can try to install a wooden ceiling. Ceiling models made of wood are able to present the appearance of a modern and contemporary room. In addition to being minimalist, the wooden ceiling also adds a warm feel to the room, you know. To maintain a minimalist impression in the room, the wooden ceiling can be installed horizontally just like when installing a wooden floor.

The latest minimalist ceiling model that is suitable to be applied at home is a ceiling with wooden beam accents. This ceiling design will combine wooden beams that are installed like panels with a plain conventional ceiling. If you don’t want to use a wooden ceiling, this ceiling model can be an alternative choice. In addition to adding to the aesthetics, the combination of a plain ceiling with wood will bring the feel of a room that is classic and warm, but still minimalist.

Although identical to the classic and luxurious European style, in fact a grid or grid ceiling can also be made in a minimalist style. In fact, the lattice ceiling is now one of the newest minimalist home ceiling models that are popular today. As the name implies, the lattice ceiling model will make the ceiling look like a square or rectangular lattice with various numbers of grids. You can apply a plain grid to maintain a minimalist impression in the room.

The model that can be applied is a ceiling with geometric accents. This ceiling is suitable for those of you who are bored with conventional ceilings. Geometric shapes can be installed in a suspended ceiling style. In addition to minimalism, a futuristic and modern impression will also radiate in the room when applying this geometric accent ceiling model.